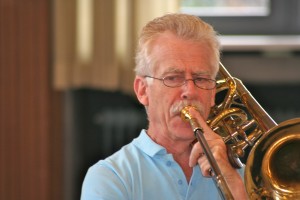 Erik van Lier was born 6 April 1945 in Haarlem, The Netherlands and started playing professionally at the age of 17 in the Dutch Radio Big Band The Skymasters. As a representative of the Dutch radio company NOS he played three times at the jazz workshops of the European Broadcast Union EBU and once at the European programme Nordring. During the Loosdrecht Jazz Festival he did a “trombone battle” with Slide Hampton, Ake Persson, Urbie Green, Kai Winding and Frank Rosalino. In 1974 he received a grant from the Dutch government to study with George Roberts (“Mr Bass Trombone”). During his stay there he also studied with Phil Teele, Paul Faulise and Ed Kleinhammer. Erik van Lier was the bass trombonist of the legendary Kenny Clarke-Francy Boland Big Band. He played with the Slide Hampton-Joe Haider Big Band, the Mel Lewis-Joe Haider Big Band and with Thad Jones’ Ball Of Fire. He also played with Peter Herbolzheimer in Germany and with the Skymasters, The Netherlands Concert Jazzband and Bart’s Bones, the trombone quartet of his brother. He was featured with his brother Bart at the workshops of the International Trombone Association (ITA) in Nashville 1987 and Eton (England) in 1989. At the Amsterdam Conservatory, the largest jazz department in Europe, he teaches bass trombone and conducts the two big bands.